A comparison between WebSockets, server-sent events, and polling

This article aims to compare differences in performance, with regards to current "real-time" behaviors in a Web browser. For purposes of this article, "real-time" refers to server pushing notifications to a client, removing the need for a page refresh. HTTP long-polling, HTTP short-polling, WebSockets, and server-sent events are avenues to accomplish this behavior and will be compared in different scenarios to measure data transfer costs. With the advent of HTTP/2 support in Node.js core, these comparisons will be done in both HTTP/1.1 and HTTP/2.

The inspiration for this comparison is to investigate the viability of using server-sent events as opposed to WebSockets without impacting performance. In real-world applications, performance can be a major factor. Reducing bytes across the wire has implications in financial tech as well as social applications. However, a balancing act exists between developer cost, application maintenance, and performance. Utilizing existing HTTP methods such as server-sent events may reduce overall project cost while meeting "real-time" behaviors.

Parallel subscriber tests are not used for the WebSocket implementations in this experiment. Parallel tests are only used to illustrate HTTP/2's built-in multiplexing. For WebSocket multiplexing, there are a number of libraries to emulate this functionality.

The interval chosen for short-polling is arbitrary. To achieve greater performance, the interval should be as close as possible to when updates may be expected.

All tests are done via HTTPS and WSS for an accurate comparison between HTTP/1.1 and HTTP/2.

For the purpose of this test, the browser cache has been disabled.

Measurements will include XHRs, document, and WebSocket requests. This excludes the 87 KB for the Primus library as well as favicon.ico requests.

Code used for these metrics can be found here. 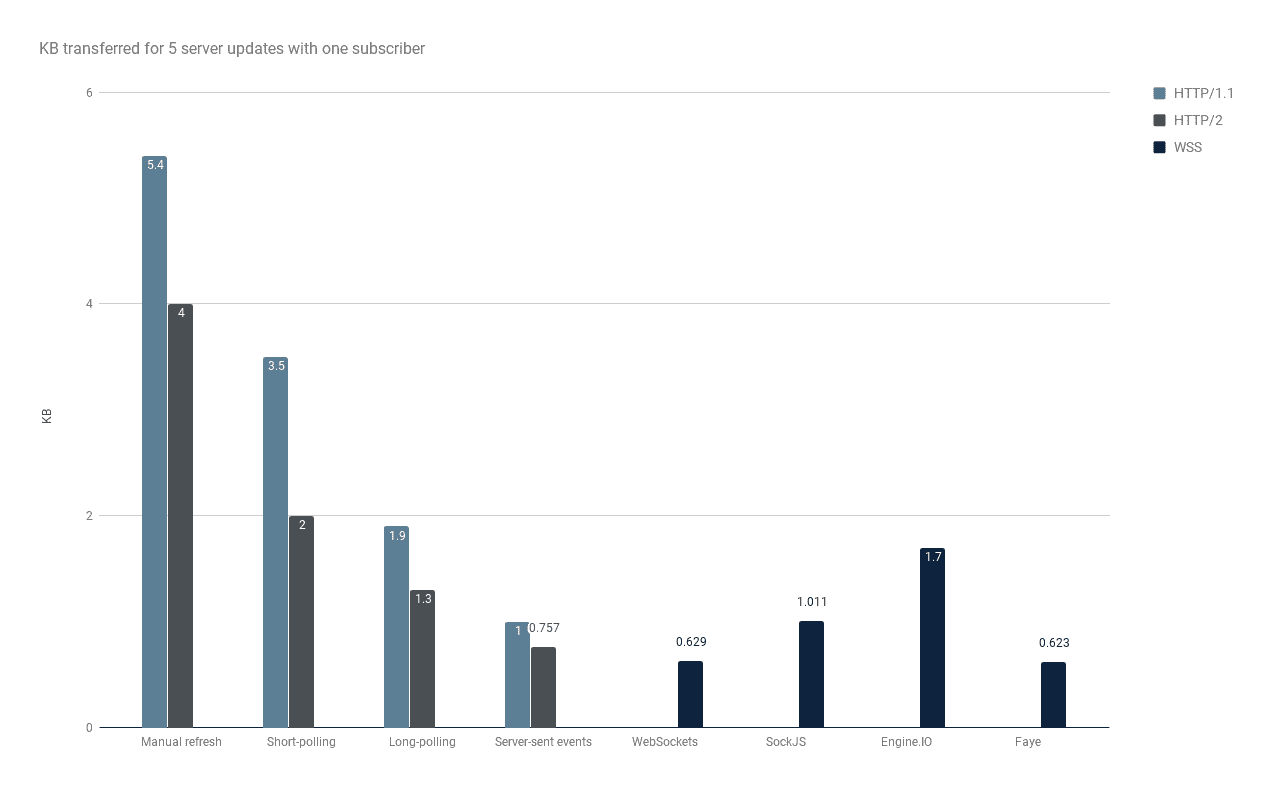 In the individual subscriber test, the cost of headers becomes apparent. The difference in performance, for each HTTP method, is the compression of headers. For WebSocket methods, headers are not passed upon every request, further reducing bandwidth cost. However, the underlying library facilitating a WebSocket connection comes with varying levels of overhead. Engine.IO is the most expensive in this test as a number of ancillary requests are made in parallel. 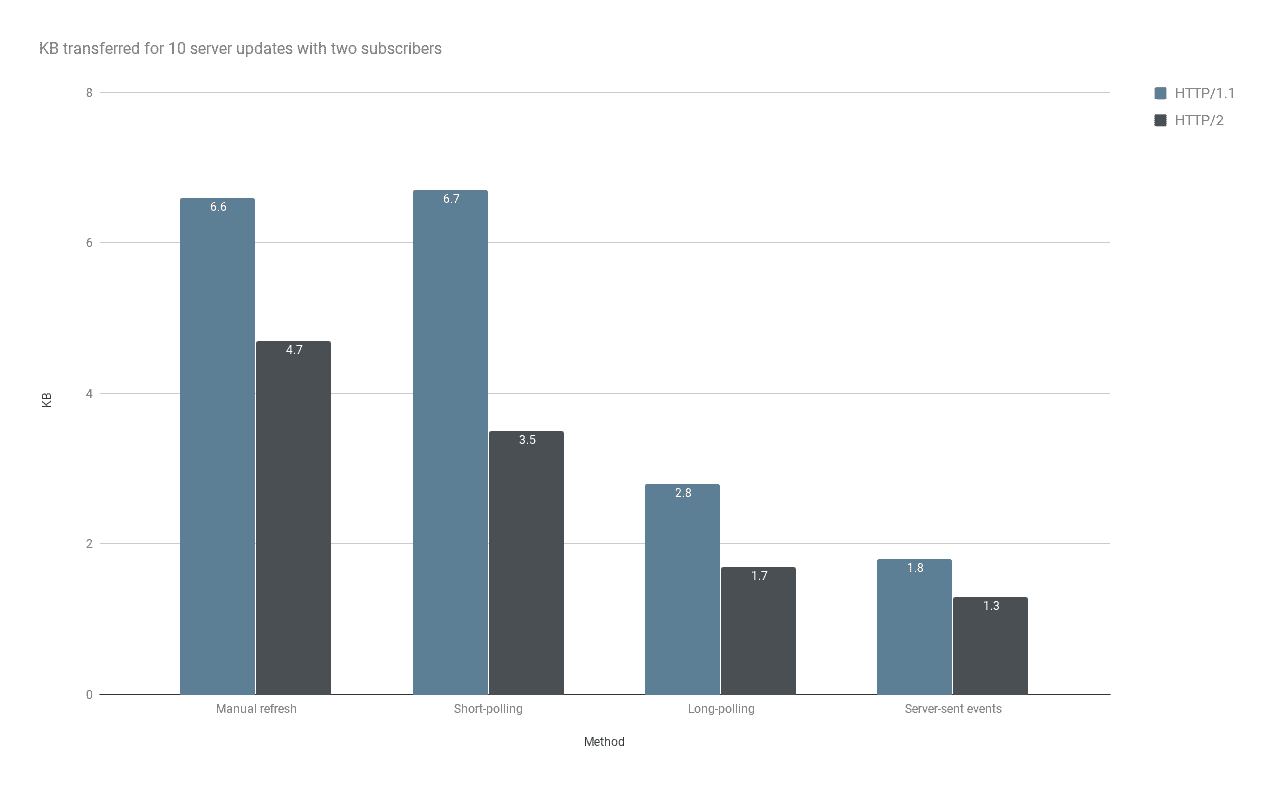 In the current state of the web, short and long-polling have a much higher bandwidth cost than other options, but may be considered if supporting legacy browsers. Short-polling requires estimating an interval that suits an application's requirements. Regardless of the estimation's accuracy, there will be a higher cost due to continuously opening new requests. If using HTTP/1.1, this results in passing headers unnecessarily and potentially opening multiple TCP connections if parallel polls are open. Long-polling reduces these costs significantly by receiving one update per request.

Server-sent events are able to take performance a step further. Rather than having an open request per update, such as long-polling, server-sent events provide a single, long-lived request to allow for the streaming of updates. Benefits of this method include only passing headers once, when the request is made, limiting data across the wire to necessary information. An EventSource will attempt to reconnect if the current connection is interrupted. Server-sent events are native to most modern browsers and reside within the existing HTTP spec. Meaning, if a legacy application has an existing RESTful layer, security, and authentication, the modification to use server-sent events is minimal. Server-sent events are uni-directional, allowing only for updates to travel from the server to the client. Additional client messages to the server, such as a POST request, would require an additional HTTP request.

WebSockets allow for full-duplex communication over a single connection. To compare, uni-directional communication(SSE) is akin to a radio. A single source broadcasts information to a listener. Half-duplex communication is similar to using a walkie-talkie. Communication may travel in both directions, however, only one party may broadcast at a time. Full-duplex is similar to using a phone. Information may freely travel in both directions, simultaneously. WebSockets is a different protocol and as such, security must be considered with implementation. Authentication and security concerns are similar to HTTP communication, however, may need to be duplicated for a secure WebSocket channel. An example of a common scenario is to authenticate a user, providing them with a token to be sent for HTTP communication. However, if a user is authenticated, an application may create a WebSocket connection without validating the token. This allows for direct access to the WebSocket API, bypassing any HTTP security measures.

In the past, server-sent events have had a higher bandwidth cost due to HTTP/1.1's handling of headers. In the scenario of uni-directional, push updates with HTTP/2 are now almost as cheap as a WebSocket transfer in terms of bandwidth. However, there is a consideration of development overhead when using WebSockets. The handling of WebSocket reconnects or "heartbeat" mechanisms, authorization, and/or including a WebSocket library result in development costs. The WebSocket API is able to be used natively, as opposed to differing libraries behind Primus in this test, however, a real-world implementation benefits from the existing libraries(WS, Engine.IO, etc) to handle reconnects and fallback methods.

The current state of browser support at the time of this writing is as follows: